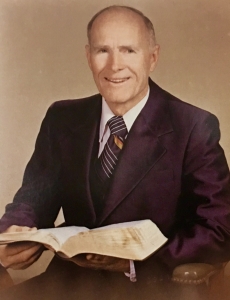 Lester L. Roloff was born on June 28. 1914 in Dawson, Texas. He grew up there on a cotton farm. At the age of 12, he was saved, and at the age of 18, he surrendered to the Lord’s call to preach. Acting upon this sacred calling, he entered college, earning both his undergraduate Bible and Seminary degrees. While he was in college, he paid for his room and board by milking a Jersey cow he had brought from his parents’ farm.

During the next several years, he pastored several churches before the Lord called him to minister in full-time evangelism. He conducted evangelistic campaigns across the nation in churches, large tents, and city auditoriums. He preached the simple biblical message that Christ is the Answer!

On May 8, 1944, Brother Roloff began the Family Altar Program which greatly expanded his ministry of evangelism through radio broadcast. He described those pioneering years in radio as “trials, tears, temptations, and testing.” In founding this radio ministry, Brother Roloff said, “The message will always be the same – a message of Calvary, the virgin birth, the sinless life, the wonderful atonement, the bodily resurrection, and the glorious return of our Savior. I’ll keep back nothing, but declare the whole counsel of God.” Countless numbers have come to Christ as a result of listening to the program.

Brother Roloff’s entire life was invested in the preaching of the Gospel and ministering to people in trouble – those he compassionately described as “the least, the lost, and the lonely.” He ministered to inmates in jail, established homes for those struggling with addictions and also helped others start resident programs around the country. Many of these ministries are still helping people in trouble today. Brother Roloff had a heart for missions. The last ministry he founded was established to reach America’s “first mission field” – the American Indians.

On November 2, 1982, Brother Roloff went home to be with the Lord while piloting his plane to evangelistic meetings.

On February 16, 1993, the National Religious Broadcasters posthumously inducted Brother Roloff into their Hall of Fame. This award is presented to an individual who, “for a significant period of time, has made an outstanding contribution in the field of Christian broadcasting with the highest of standards and faithfulness to Christ, of whom it can be testified or who can testify…”I have fought a good fight, I have finished my course, I have kept the faith’”. This Hall of Fame Award is the National Religious Broadcasters’ highest honor. During the ceremony, Brother Roloff was described as “a man with a backbone of steel and a heart of gold.”